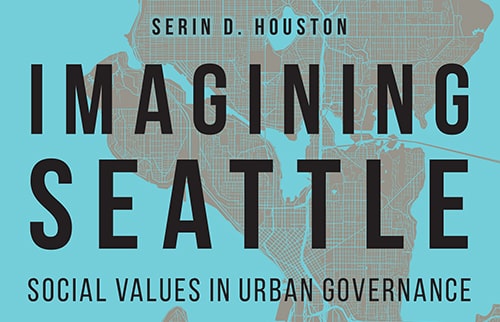 Seattle is frequently described as progressive, green, and innovative — a place where city government and local organizations have worked to implement sustainability, creativity, and social justice policies and procedures, particularly in response to federal withdrawals from these areas. Imagining Seattle studies urban governance to better understand how specific social values come to fruition and with what impacts. From my experiences living in Seattle and my previous research in the region, I was especially interested in why it often seems that sustainable, just, and creative municipal policies do not necessarily produce sustainable, just, or creative outcomes. I wondered why that was, and why it is that when we try to address inequities we sometimes further these same inequities.

I use ethnographic methods and a geographic perspective to investigate a number of Seattle’s initiatives, including the designation of a new cultural district near downtown, the push to charge for disposable shopping bags, and the training of municipal workers about institutional racism. Looking not just at what these policies say but at how they work in practice, my findings show that classism, racism, and economic growth goals limit the outcomes of social justice, sustainability, and creativity efforts.

Ultimately, my book underscores a broad truth – unless equity is central to endeavors, inequities are often reproduced. This is an important insight since Seattle is frequently heralded as a leader of progressive urban activities. It is important to understand what enables policies to achieve their intended outcomes because crafting just and equitable places is necessary and worthwhile. This conclusion and set of findings is certainly not something that only matters in Seattle. Quite the contrary, the deadly consequences of racism, classism, and economic pressures are present in sites throughout the United States. For local governments or institutions working to implement social change and deepen values-driven work, my expertise in this field can serve as both inspiration and guide.

Sanctuary is a Process, Not a Place

Although most people say “sanctuary city” when talking about places that appear to have pro-immigrant policies in place, the term actually doesn’t have an agreed upon definition. Instead, “sanctuary” is shorthand for places where state, county, and/or city governments have adopted policies that regulate their participation in federal immigration enforcement. These policies are often called “separation ordinances” or “integration policies” in addition to “sanctuary policies.” Regardless, places that adopt such policies are commonly referred to as “sanctuary cities.”

This term is limiting. Not only does “sanctuary city” not have an official definition, the term is simplistic. Calling a city a “sanctuary city” makes it seem as though the city has adopted a single, uniform stance on immigration issues. Either a city is a “sanctuary city,” or it isn’t. This erases nuance, which makes it harder to understand the impacts of policies or to see the differences in policies adopted around the country.

Sanctuary isn’t a name for a place – it’s a process made up of a whole host of policies, civic values, and understandings of justice. When looking at sanctuary as a process, so much more is revealed – attempts to extend belonging to all residents of a community (both citizens and noncitizens); how pro-immigrant policies promote the narrative of “good” and “bad” immigrants; and how efforts to create inclusive communities vary throughout the U.S.

With my team of undergraduate research assistants, we gathered 239 U.S. sanctuary policies passed from 2001—2014 to analyze the various local expressions of sanctuary. These policies were mayoral executive orders, ordinances, police department and county sheriff office policing policies, and resolutions passed at the city or county level. To show the differences in sanctuary policies, we divided the policies into two categories: declarative and procedural.

Taken together, declarative and procedural policies show that sanctuary is a process that can be approached through local policy in a wide variety of ways.

All of the documents my team and I studied show how local authorities choose to interact with residents and assert their right to determine their level of involvement in federal immigration enforcement. These sanctuary practices show how policies can be used to build greater membership and belonging among all residents.

Most of all, these policies reveal the variations in the sanctuary process. By approaching sanctuary with this greater appreciation of its complexities, I can assist in navigating the landscape of immigration enforcement and sanctuary policies at play in communities across the U.S.

What Is the Modern U.S. Sanctuary Social Movement?

Although the concept of sanctuary has been around since ancient Greece, Rome, and Egypt, sanctuary efforts emerged in the U.S. during the Vietnam War. This was followed by the founding of the faith-based Sanctuary Movement for Central Americans in the 1980s and ‘90s. Members of the Sanctuary Movement for Central Americans both advocated for the U.S. to stop its geopolitical involvement in Central America and provided assistance to people migrating across the U.S./Mexico border. This aid took the form of housing people in places of worship and offering legal, spiritual, and economic support. With tens of thousands of people working in a sanctuary network that spanned thirty-four states, the Sanctuary Movement has been described as one of the 20th century’s largest social movements.

The New Sanctuary Movement, which is also faith-based, started in the early 2000s. This movement focuses on providing sanctuary in religious spaces to mixed-status families when at least one family member faces deportation. Because Immigration and Customs Enforcement typically does not raid places of worship, many people live there while waiting for their deportation order to be dropped. Activists report that around 1,100 congregations and faith communities are currently part of the New Sanctuary Movement.

My research on U.S. Sanctuary Social Movements primarily focuses on:

My co-author, Charlotte Morse, and I found that these pro-immigrant efforts frequently spoke on behalf of migrants rather than with them. Additionally, the movements’ discourse created an ideal immigrant to help – “extraordinary” religiously “pure” people fleeing danger in the case of the Sanctuary Movement for Central Americans and completely “ordinary” family members in the case of New Sanctuary Movement. In both situations, this kind of language has the effect of rallying a lot of people from faith communities to the cause. Yet, this same language also limits support to certain migrants, makes many migrants’ experiences invisible, and paints a picture of immigrants as always different from U.S.-born citizens. Such representations flatten understandings of migration and diminish the participation of migrants in their own advocacy.

Recognizing these trends is an important step to rethinking movement strategies and languages so as to increase the efficacy of a social movement’s goals. I look forward to collaborating with immigration advocacy and social movement groups on inclusive strategies.

Climate change is already occurring, but the daily impacts are not experienced equally. Some people are more insulated from the effects of climate change, while others are faced with leaving their homes. While my 2018 funded climate migration fieldwork in Kiribati was called off due to Kiribati’s border closure, I am developing a new project on “managed retreat” to western Massachusetts. “Managed retreat” refers to planned movement of communities away from coastal areas and other places that experience frequent natural disasters in an effort to mitigate future impacts. As hurricanes – and weather events more generally – intensify in strength and coastal inundation and erosion prompt relocation (both planned and in response to significant events), western Massachusetts is experiencing episodic in-migration related to climate change.

My ongoing research and contacts I have in this field allow me to offer advice and feedback to governments and organizations as they prepare for climate change and the anticipated increase of migrants that will accompany it. My focus is on ensuring that resettlement plans revolve around equity and that governance strategies are crafted to be adaptive. 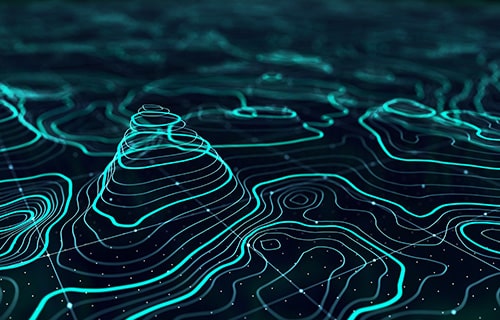 My training in geography and my curiosity about how we teach and learn prompt me to consider how local and global issues interact. Through global/local learning, I strive to show students how global issues and processes are present in our local contexts and vice versa and what effects such interactions can have over time. Bringing together the local and global in my classes leads students to deep insights and social action that they may not have had otherwise.

This teaching philosophy also informs my writing and research. For example, I’ve co-authored, with Kirk Lange, work about global/local community engagement, which is a kind of geographically-informed hands-on learning and political action. In our article, we use examples from Mount Holyoke College to argue that global/local community engagement helps students develop a sense of reciprocity, the ability to reflect on their experiences, and the skills to notice connections and distinctions between places. All of these skills and habits give students the tools needed to grapple with the complex challenges and social division of the twenty-first century.

Another example of global/local learning in practice revolves around a visit I helped lead to a nearby county jail where noncitizens are held in detention. During this visit, our group spoke with both jail staff and detainees, which left us with a better understanding of how federal and county immigration enforcement bureaucracies work. Based on our experiences at the jail, David Hernández, Avery Allen, Sofia Rivera, and I wrote an article reflecting on our conversations with detainees awaiting deportation. In this experience, as in all global/local learning, we underscored our shared humanity and collective responsibilities.

If you are interested in designing learning opportunities that focus on global/local connections, please get in touch with me.